I’ve been in a funk for a couple of weeks, and it occurred to me today that maybe I need to spew it out here.

There are so many things I’ve had to say, but then I get tired of looking at a computer, and don’t. But the biggest thing I’ve got going on is an identity crisis.

A couple of weeks ago, I dragged my buns into Seattle on a Friday night to see a bunch of my old TV friends, and it was pretty great. But there was one silly thing that keeps bugging me.  One of my old photogs, someone I worked with on a nearly daily basis for seven years, didn’t ever say hi, although there weren’t very many people when I got there. There’s no way I’ve done something to make him angry… and he’s one of those really nice people who you just don’t ever expect to snub you.

Pair that with a conversation I had a couple of months ago where I was sitting next to someone who works in a different office (but I spent a couple of days with her in person when she started at the agency a couple of years ago, and was on her team for longer than that).  The conversation went like this:

Me: Yeah you are!  I’m Ange. We worked together on XX. (No, I wasn’t TRYING to be a snot, it was just one of those moments where the words just start to come out of your mouth before you realize how they sound…)

So it occurs to me that maybe the simple change of my hair is really enough that people don’t recognize me?  Yes, I’ve changed my makeup a bit, and I wear more dangly earrings, but yeah. Same clothes. Same dimply smile. In general, same body.

But my identity crisis doesn’t quite stop there.

I’ve been using the pic of me in my special ninja hat as a profile pic for a year now. But I’m not that bald chick anymore.

I’ve thought about putting back up my favorite pic of me with my kid, laughing. But I’m not her anymore either.

So I’m stuck in this limbo, where there are days I look in the mirror, and I don’t identify that face as me.

The other identity question I’ve been asking myself lately… will breast cancer define who I am for the rest of my life?  After all, I don’t have cancer today.  And that’s the plan for all of my tomorrows.

But the part I have to remember is that my boobs never were ALL of who I was, so they are not all of who I am now.

I can never again be who I was a year, or even five years ago.

I will continue to move onward. 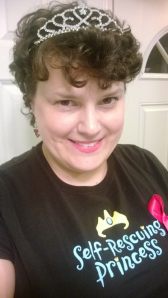