And a fire dance through the night!

In 12 hours, I’ll be reporting to the hospital for my reconstruction.  How much I’m guessing I’ll sleep in those hours. Close to none.

I’m feeling so many emotions, but are the forefront, are scared, anxious, excited.

I check in at 9a tomorrow.  Surgery itself is scheduled to start at 11a, and last for 3 hours.  I’m supposed to spend a couple of hours in recovery, and if everything goes as planned, I’ll be homeward bound between 3-4p. Less than a work day, and I’ll have the rocks in my chest removed, and some smaller, softer gummy bears in place that will be held in place by a special surgical bra for several weeks.

I’m hoping I’ll be able to lift my arms above 45 degrees this time, it’s doable, but pretty annoying.  I’ve been promised no drains, which if you’ve forgotten from last summer, are the lovely suction bulbs that I got to wear for a full month after the boob removal part.  But now since I’m just doing a swap it should all be much easier.

The thing is, I still can’t help but think how lucky I have been.

The treatment, well, it has sucked, but it could have been SO much worse.

I caught it early, so I didn’t need radiation.  This is not only easier, but has helped to move the timeline along.

And the amount of support I’ve seen from friends and family has just been amazing.

I’ve got a hell of a whole lot more to do with my life, so I do have one more favor to ask.

If you could hook me up with some more of those happy, healing thoughts for my surgery that would be great.

I promise to let you know how it goes once I’m feeling up to typing.  I am taking next week off of work, as I think I’ll likely need some good drugs and I don’t think that Oxy & work mix, but I promise I’ll let you know now it went, and how the sitting up in surgery thing works.

In case I’ve forgotten to say it lately. Thanks for me and for this guy, who likes having a mom around. 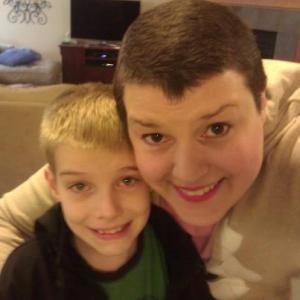 Next time he gets his hair cut, it will be shorter than mom’s!

5 thoughts on “New Boobs On Monday”